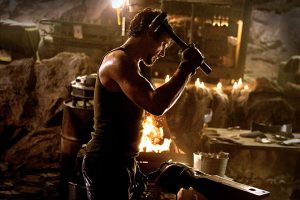 With the end of the original Avengers films upon us with the upcoming release of Avengers: Endgame, we are taking a look at the entire series, from the first film, Iron Man, in 2008, to the last, Avengers: End Game, and looking at how each contributed to the story and the evolution of the Marvel Cinematic Universe (MCU) with its depictions of feminism, defined as the establishment of political, economic, personal, and social gender equality.

Sophistication of Story: Iron Man is the first film in the current MCU, so it doesn’t need to be quite as sophisticated as one might expect from more current films. It gets its sophistication from having an anti-hero as the main protagonist, a character who gradually transforms into a hero. It’s also a superhero movie where no one has actual super powers, just technology. Another thing Iron Man does is introduce politics into the MCU.

Contribution to the overall Avengers storyline: This film introduces the MCU in its current incarnation, so that’s obviously a major contribution. Additionally, it introduces the politics that will carry through much of the MCU, with Rhodey being in the military, and Tony starting off the film as a weapons supplier for the military, another issue that will come back in later films.

Infinity Stones: None yet

Villain: Obadiah Stane is a good introductory villain. He is actually a version what Tony could become, had he not gotten taken by terrorists in the beginning of the film and changed his views as a result of what he sees. Stane wants to create bigger weapons and isn’t happy that Stark wants to stop manufacturing weapons. Initially, it’s not an unreasonable position for a person in Stane’s literal job position. It’s when he makes a giant robot and tries to kill everyone that there’s a problem.

Does it pass the race Bechdel Test: No

Feminist Level:
This film establishes Tony Stark as someone who objectifies women. You also have the first love interest to serve as mainly a damsel in distress.
Ratio of Male:Female Characters
Male: (6)
Tony Stark
Rhodey
Obadiah Stane
Yinsen
Agent Coulson
Happy Hogan
Female: (2)
Pepper Potts
Christine Everhart (the reporter/one night stand)
-1 for one night stand (Stereotype of Tony as a womanizer)
-1 for Pepper having no contribution to the plot but being rescued (Damsel in distress)
-1 for Pepper bandaging Tony’s wounds (Trope)
-2 for more than double the number of male characters to female characters
+1 for Pepper doing the heart surgery on Tony
+1 for the reporter from the one-night stand being the one to uncover the Stark Enterprise weapons being in the hands of terrorists

Sophistication: This Iron Man film is a little less sophisticated and relies a little more on tropes. It has the sexy secretary, the Russian villain, and for some reason, electric whips. However, it does introduce the first female MCU character of note: Natasha Romanoff/Black Widow.

Contribution to the overall Avengers storyline: We learn that Natasha Romanoff was undercover because she was evaluating Tony Stark as a potential member of the Avengers Initiative. Iron Man passes, but Tony does not. He is still, however, offered a position as a consultant.

Infinity Stones: None yet

Villain: This film has two villains, neither of whom is that great. Ivan Vanko is cartoonish and doesn’t really have a clear goal. Justin Hammer is just greedy, but not compelling enough to carry a film.

Does it pass the Bechdel Test: Yes (Pepper and Natasha talk)

Does it pass the Race Bechdel Test: No

Feminist Level: You have Pepper Potts still serving as mostly a love interest but you also have the introduction of Natasha Romanoff/Black Widow, the first female Marvel character with substantial ability, and the first female Avenger. Pepper Potts also gets an upgrade to CEO of Stark Industries. The introduction of Black Widow is a little iffy, with her initially showing up as the sexy secretary, but then it turns out that her role as the sexy secretary is to take advantage of Tony’s objectification of women, which makes Natasha and Fury, as well as the audience, in on it. Nonetheless, Romanoff is not a developed character in this installment. She is the sexy secretary/then the cold spy, nothing in between. We have to wait for later films to find out if she has a personality.
Radio of Male:Female Characters:
Male: (7)
Tony Stark
Rhodes
Justin Hammer (Sam Rockwell)
Ivan Vanko
Nick Fury
Agent Coulson
Happy Hogan (Jon Favreau)
Female: (3)
Pepper Potts
Natasha Romanoff
Christina Everhart
-1 for sexy secretary
-1 for Pepper Potts quitting as CEO because it’s too stressful
-2 for more than double the number of male characters to female characters
+1 for Pepper becoming CEO
+1 for Black Widow introduction/fight scene
+1 for not maintaining a rivalry between Pepper Potts and Natasha Romanoff
Total: 4/10 – so at least we’re improving